Learning the ABC of a new musical language

A piano teacher claims her teaching method can put her youngest pupils on a musical high note. AMY PATE reports
EIza Lusher has taught skilled pupils to play the piano all her life but when she arrived at the American Community School in Egham to coach the younger children, she had a problem.

While youngsters aged between four and seven were eager to learn, she found they couldn’t remember the notes. So EIza and her physicist husband Chris, from Nobles Way, Egham, devised a new teaching method and she now finds the younger pupils can remember the notes, and children as young as three are learning to play.
Elza was born in Hungary, learned to teach at its world-renowned Franz Liszt Academy of Music and joined the ACS School in 1999.

She said: “The children would learn, but the following week they didn’t remember anything. I knew that if I didn’t tap into their language, I wouldn’t be able to teach them successfully” Finding herself struggling, she started devising her own method, based on the Hungarian Kodaly approach, which teaches singing before playing.She gave each note a monosyllabic animal name beginning with the same letter – ant for A, bird for B, cat for C and so on and encouraged the children to sing the sound as they learned to play. Elza was amazed by the results. “Now I love to teach them and they find learning very easy because they remember the animals. If I ask them to sing ‘dog’ they can sing a D. But without the word, the letter means little to children, especial­ly those who can’t read yet” Again with the help of husband Chris, a senior lecturer in physics at Royal Holloway College in Egham, she also started working on books to teach small children to read music. Chris came up with the idea to draw the animals inside the notes. They released their book Dogs and Birds, complete with drawings by Egham illustrator Liz Patton, earlier this year.
Elza said they have proved popular with piano teachers, while parents are also enjoying them because it allows them to teach their children to read music even if they have little or no musical knowledge themselves 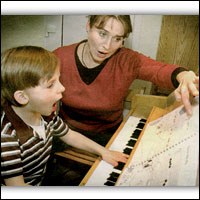 Laila Mansell, three, and her brother Aiden, five, are two of Elza’s youngest pupils. Mum Diana said: “I’ve always said that the moment they stop enjoying it they can have a break and wait until they’re older, but that hasn’t happened. I haven’t had to drag them to lessons at all. 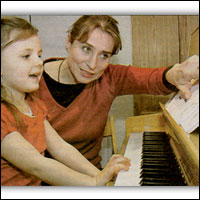